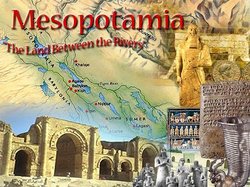 Ancient Mesopotamia had a classified social structure. People at higher levels have greater status than others. At the top was the upper class, which included priests, land owners and government officials. These people had the largest and most luxurious homes, near the center of the city.
In the middle was the common class. This included merchants and craftspeople. The craftspeople included highly skilled metal-workers. They worked with with such metals as gold, silver, tin, lead, copper, and bronze.  With these materials, they made swords, arrowheads for the army, plows, hoes, mirrors, and jewelry.  The common class also includes, farmers and fishermen.  They live on the edge of the city, in mud bricked houses.  To work, the farmers built or repaired irrigation systems.  Also, on occasion, they were forced into fighting with the army.  Finally, there was the bottom of the social class.  This class provided slaves.  The slaves cannot own land, and live with their owners.  So, Ancient Mesopotamia had an organized, consistent social structure.