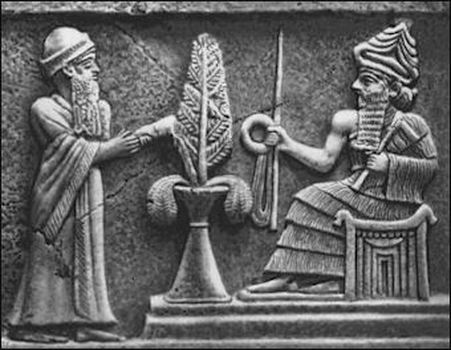 This is a picture of a king being worshipped.
Government:
In Sumer, the city-states were ruled by kings.  All of the people believed that the kings were chosen by gods, and were sent to rule.  This belief made the king's very powerful, and helped strengthened the social order, since the Sumerians believed that they had to obey the will of the gods.  The kings enforced laws, collected taxes, built temples, and made sure that the irrigation systems were maintained.  The kings also led his city-states army.  The city-states were always fighting for land boundaries, and the use of water, so the kings leading the army were their most important jobs.  The army consisted of both professional and common soldiers.  Some were foot soldiers, and others drove chariots, which are wheeled carts pulled by horses.  Even though the kings did a lot, they did have officials to do other duties.  Governors ruled over outlying towns, and scribes helped record laws.  The Sumerians were the first to develop a system of written laws. Finally, One special group of officials watched over the canals.  They did to make sure that they weren’t damaged, and to make sure that farmers didn’t take the water illegally.