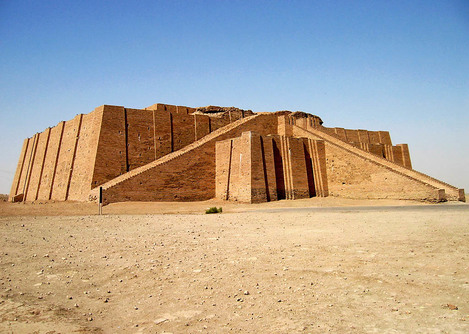 This is a picture of a ziggurat.
Religion:
﻿All civilizations must have a religious system.  They could include a set of beliefs, usually in gods, or a god, to then together form worship.  The Sumerians religious beliefs their daily life.  The Sumerians tried to please the gods in all things, from growing crops to settling disputes.  The religion bound them together in a common way of life.  They showed their beliefs by building temples, and religious towers called ziggurats.  The king’s duty was to build and maintain the ziggurats.  These towers were made of mud bricks and located near temples.  The ziggurats were so big, that you could see them from 20 miles away, and they were eight stories high, and 200 feet wide.  The Sumerians believed that the gods lived in the ziggurats, so they built temples in the ziggurats for them.  Outside of each ziggurat, they built staircases, long enough for the gods to come down to earth on.  Kings and the priests stood in the towers, asking for the gods blessings.  Statues expressed all of their beliefs.  Most of the statues were very detailed and lifelike.  They also believed that their gods were pleased when the people showed them love, devotion, and obedience.  Also, the Sumerians had ceremonies where musicians played, and human sacrifice, which is a ritual killing of a person offering themselves to the gods.  Finally, the Sumerians were polytheistic which meant that they believed in multiple gods.﻿